The u9s played Blarney in two mini games in the Castle Grounds on Saturday morning. In a game against very good opposition our boys really battled hard and showed some great skill and determination.

The squad who played were as follows: 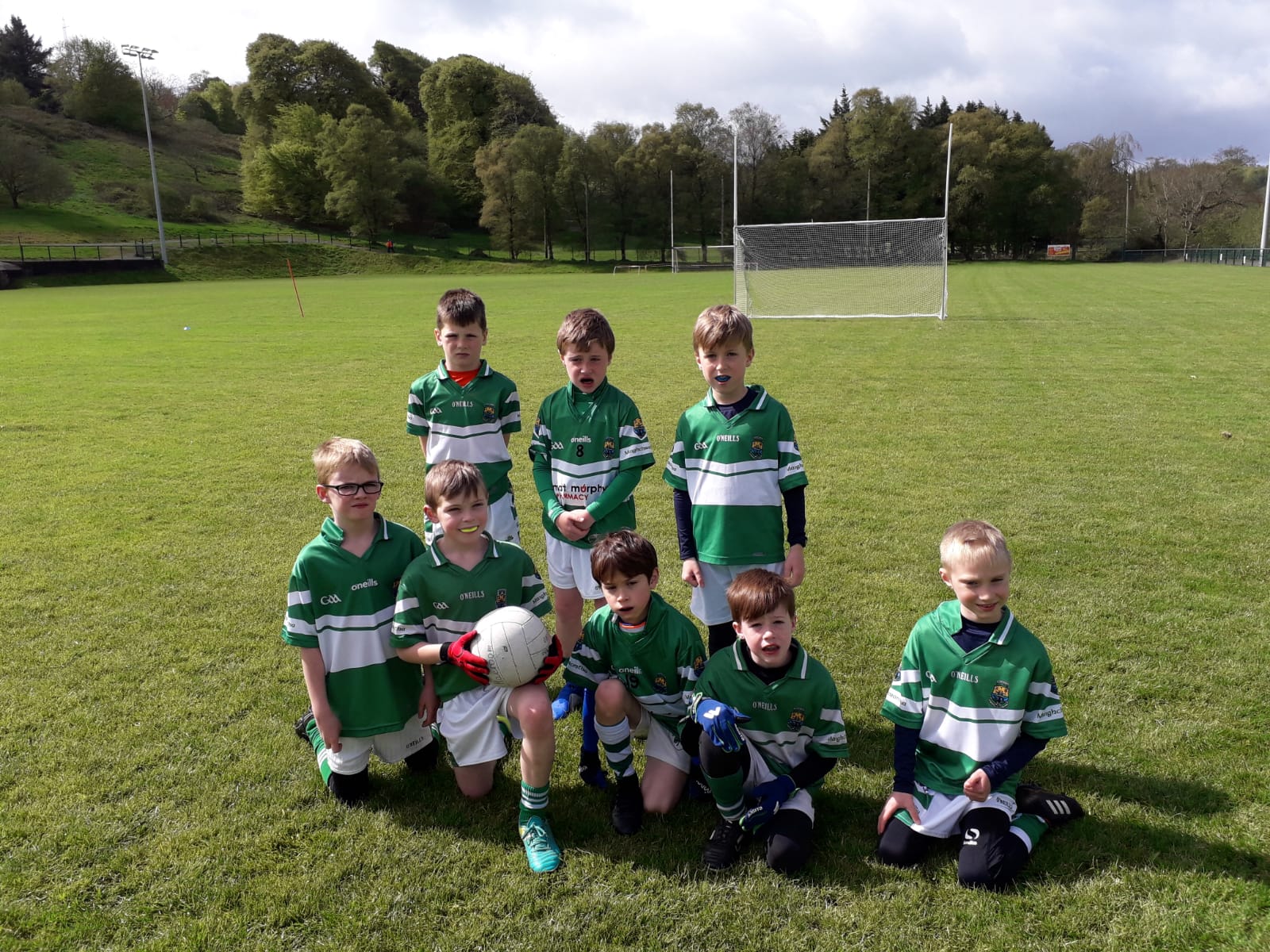 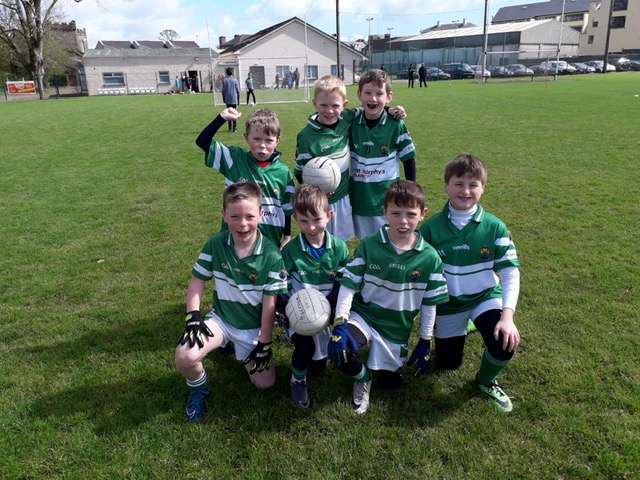 The u10s played four games against Aghinagh on Monday night and won three out of the four mini games played and a great nights football was enjoyed by all.

The squad who took part were: 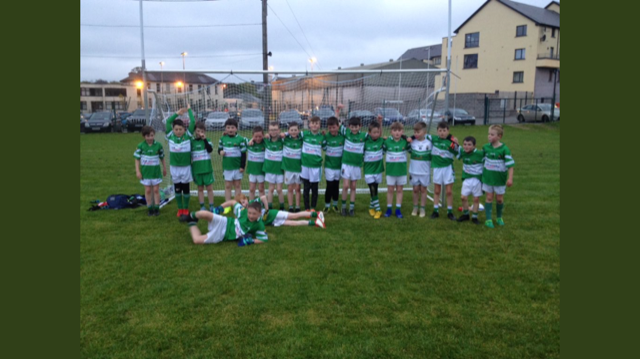 The u11s competed in the John Kerins memorial qualifier tournament on Saturday morning which was hosted by Nemo Rangers. They played four games against quality opposition in Nemo, Bishopstown, Castlehaven and Na Piarsaigh. The lads played well and while not winning it outright had a great morning and will take loads from it going forward for the rest of the year.

The squad who competed were: 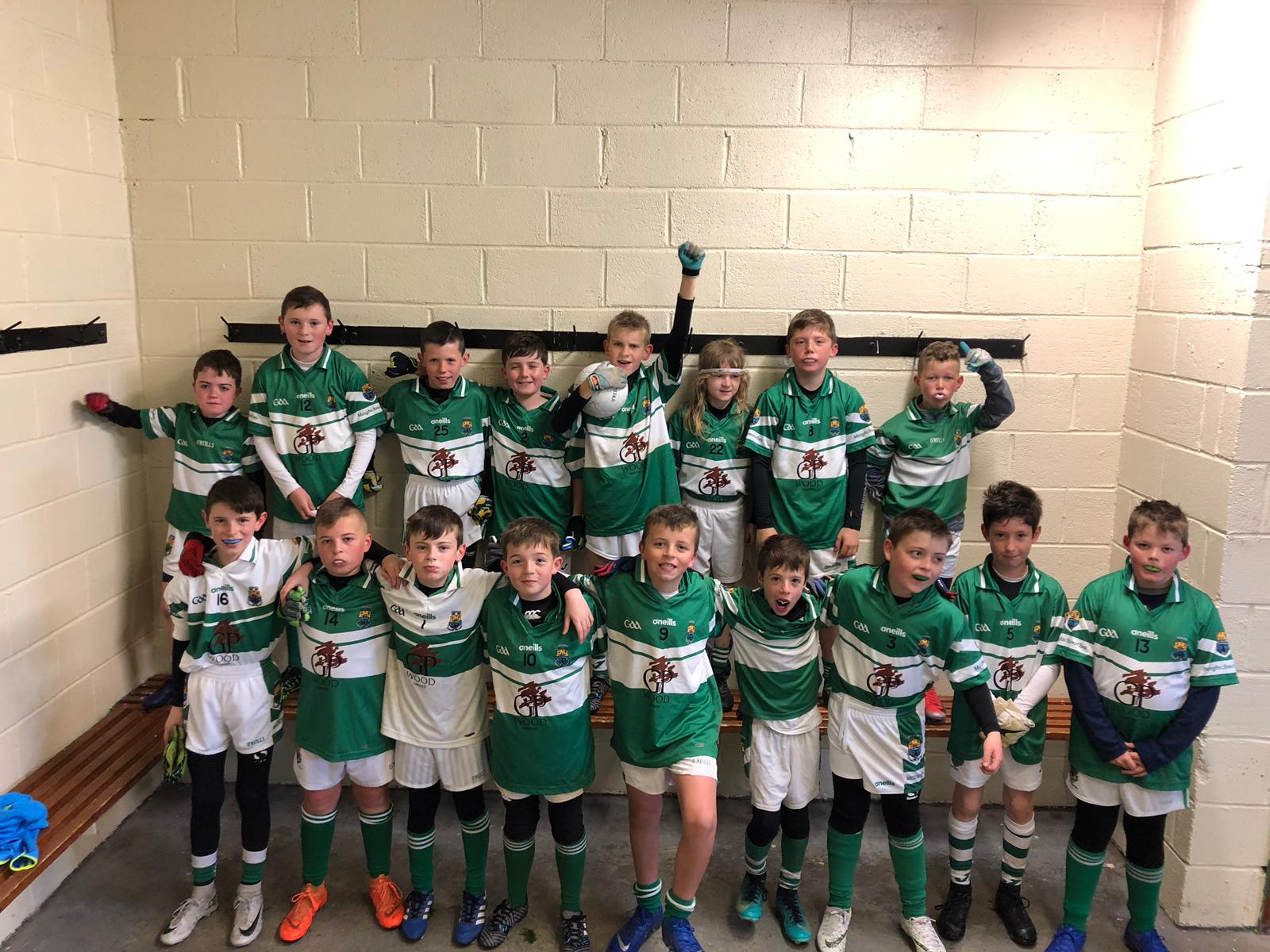 The u14s played a challenge match last Thursday evening against O'Donovan Rossa. They were beaten on the night by a more physical team, they will look to improve in their upcoming league match against Aghabullogue on Friday night.

The squad that played against Skibb was:

The U16s played Canovee in a challenge game on Sunday last and used 22 players in a good competitive game. They play another challenge game this Thursday away to Dohenys and a league game  away to Clonakilty next Bank Holiday Monday.

The Minors played a league game last week against Canovee and went down to their hosts on a scoreline of 5-9 to 0-15.

They were due to play a Mid Cork League game against Aghinagh last Friday night but it was called off by our opponents due to a conflicting u21 fixture. The Juniors will now play a challenge game Friday night against St. Johns

The Premier Intermediates welcomed Castlehaven to the Castle Grounds on Sunday afternoon last and a super game in even better conditions took place The lads were trailing by nine points at the break but stormed back into the game in the second half and very nearly pulled off what would have been a great result given the position they were in at half time. There was plenty of positives on the day including some super point taking from Andrew Hegarty, Pa Lucey and Ethan O'Gorman, as well as tireless work from Mark Corrigan, Tony Dineen and Caleb Dineen. The final score was 0-16 to 2-12

The team that started was:

Our main adult club sponsors Macroom Motors hosted our committee members and some of our players on Monday night and Pat Barrett the General Manager presented the club with a new set of jerseys. We are extremely grateful for Macroom Motors continuing loyal support of the club and we are proud to be associated with their brand. In a good move the club have also now put the "Opt for Life Logo" on the back of the jersey, Opt for Life are a key foundation in encouraging organ donation and we would encourage all of our members to become Organ Donors.

Lastly we would like to thank Richard McSweeney for designing the new Macroom jersey which is getting rave reviews from all our members and can be seen below: 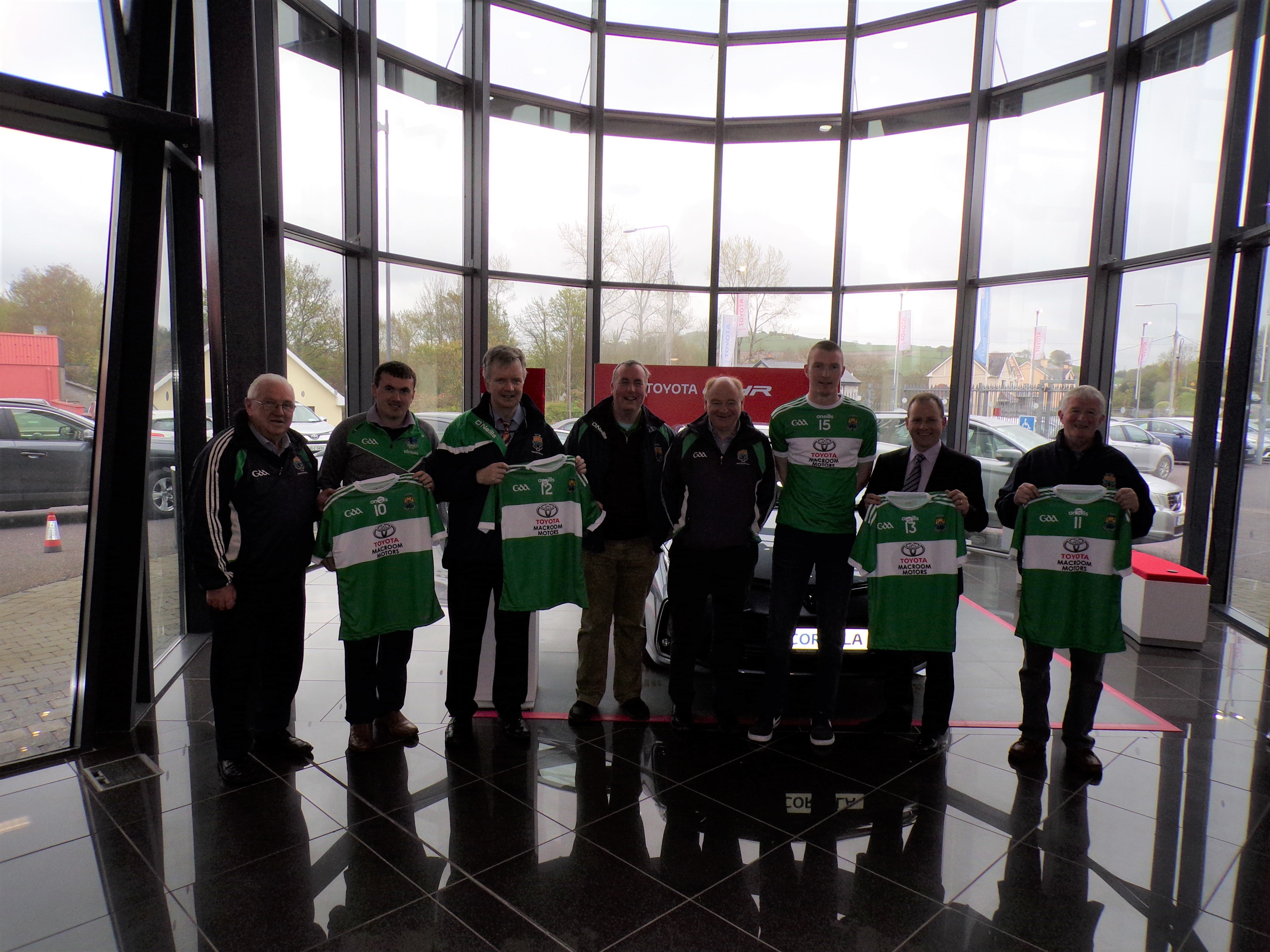 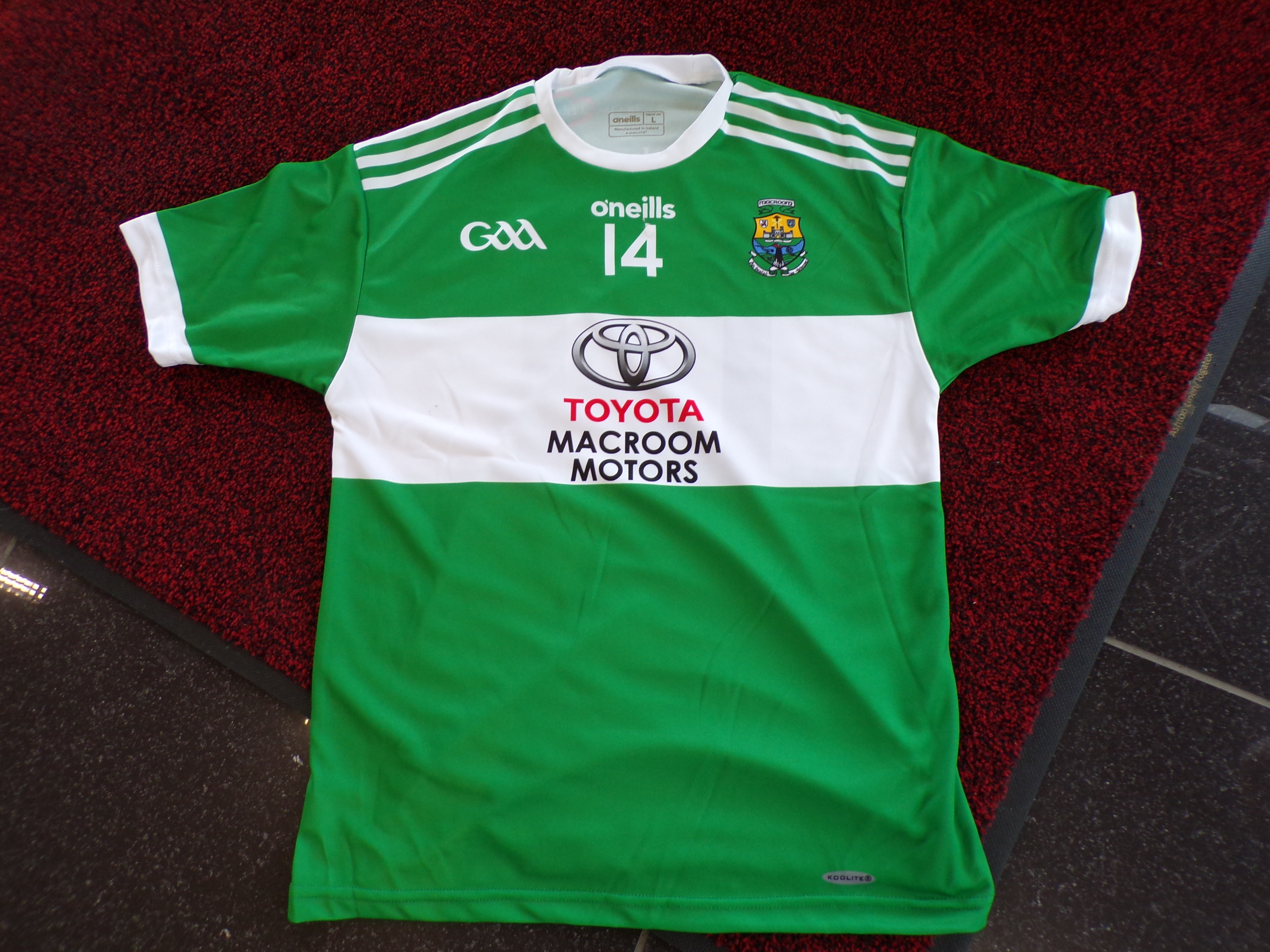 A really successful Easter Camp was run last week in the Castle Grounds with over 50 young players under the age of 12 learning new skills over Easter Thursday and Friday. A big thanks to all the coaches who included Concubhar Murray, Alan O'Shea, Donie Angland, Bobby O'Dwyer, Tadgh Sheehan, Jeremy Kelleher, James Duggan, Colman Corrigan. Thanks also to Margaret McSweeney and Dr. Con Kelleher for capturing pics of the camp and finally a big well done to Shane Dunne who came up with the idea and hopefully it becomes an annual event.

MACROOM GAA  would like to invite you to take part in our annual Golf Classic on May 31st in Macroom Golf Club.

Anybody who still has not paid club membership please do so asap.

A big well done finally to Mark Hunt and Robert Lucey who were part of the Cork u15 squad which defeated Kerry last weekend.